Online web-mapping is a competitive business. There are Bing Maps, Google Maps, Yahoo Maps, Open Street Map, and many other providers. Until recently, Multimap.com was a popular mapping site here in the UK, partly because it presented Ordnance Survey maps and displayed OS grid coordinates under the map.

So, I took it upon myself to add back in the ability to display OSGB grid coordinates to Bing Maps, and creating a Bing Maps App seemed an ideal platform to do this.

Bing Maps Apps are Silverlight “plugins” that are published to and hosted on the www.bing.com/maps/explore site. A Bing Maps app typically overlays additional information (pushpins, polylines, or polygons) on the bing.com map representing a particular set of data, but it can also be used to add additional functionality to the map.

The coding experience itself was…. interesting. Writing Bing Maps Apps requires learning yet another SDK (which you download from the MS Connect site) separate from all the other existing Bing Maps family of products (e.g. the AJAX control, Silverlight, Windows Phone 7, SOAP and REST services). Many of these have similar features, namespaces, and classes, but they all differ slightly, and there were some head-banging moments when I tried to do things the way I was used to, rather than the “Bing Maps App”-way. Also, since Bing Maps Apps are plugins to an existing map (the one displayed at www.bing.com/maps), you don’t have to (and in fact, can’t) edit many of the properties of the underlying base map – only those defined in the layer used by your app itself. Again, I’m used to having full control over the page/app in which my map is displayed.

Some parts of development proved to be pleasantly simple, however. The debugging and testing from within Visual Studio, for example, was brilliant. And the deployment process was equally smooth – compile your app and upload it to http://www.bingmapsportal.com . You get an instant response from an automated test of your code, and then within about a week your app is published on the bing.com site – that’s it!

And here’s the app in action – displaying the OS Grid Square references at various resolutions for the current centre point of the map, together with the OSGB36 Latitude/Longitude: 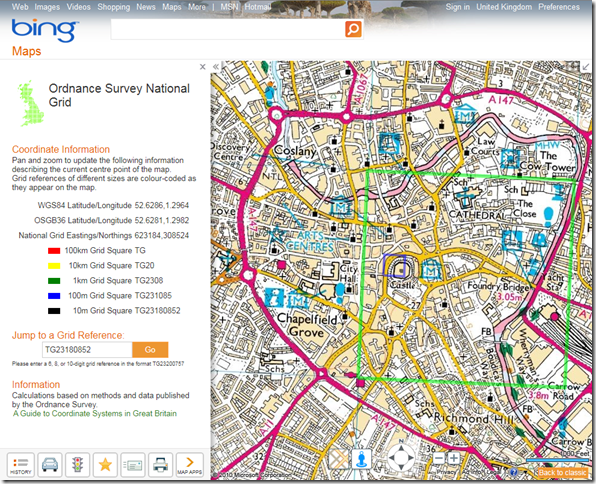