Yesterday, Microsoft released the first release candidate of Internet Explorer 9. Amongst other features, the latest incarnation of Microsoft’s browser now includes support for the W3C Geolocation API. What this basically means is that (if you allow them to do so), any websites you visit on the internet will be able to determine your current real-world location as you are browsing, and potentially update their content accordingly. Location-aware applications are already well-established in the mobile application market (with apps like foursquare and location-enabled twitter clients proving popular) but they are still relatively scarce in the traditional web application domain.

The geolocation API has been around for a while, and I played around with it a bit last summer. Last time I looked at it, I decided it was only of limited practical value, mainly for the following reasons:

With the support for geolocation now added in IE9 (and already present in Firefox, Chrome, and Safari amongst others), at least the first one of these points seems no longer valid. So, I thought it was time to revisit the geolocation API.

Fortunately, the Geolocation API is simple and relatively well-documented, so I threw together a quick webpage that displays a Bing Map and (assuming you agree to share your location) centres it on your current location, as reported by your browser.

The results were… interesting. I loaded the page above in three browsers, all running under Windows 7 64-bit:

Firstly, I tested them on my desktop computer which has a wired connection to my broadband router (this is important!).

Firefox was the first to be tested, and it successfully returned a geolocation result, although the location accuracy was fairly abysmal – placing me somewhere in a circle of radius about 100 miles around London. I’m in Norwich, which is just inside the Northeast extent of the circle, so technically the geolocation was correct within the bounds of its own stated accuracy, but hardly convincing. 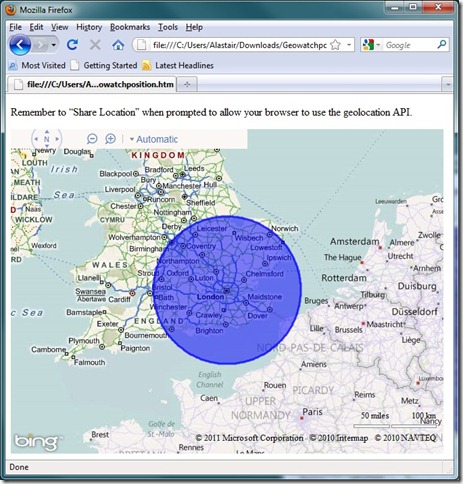 IE9 was next, and the result was returned with much greater accuracy, although, as far as I’m concerned, was less correct than the previous result from Firefox. The geolocation result was now shown with an accuracy of about 20 miles around London – a smaller area, although crucially one that no longer included my actual current location!

Just when I thought this couldn’t get any worse, I loaded the page in Google Chrome, only to be greeted by a timeout error. I’d set the timeout in my script to 30 seconds, which already seemed way too long for any kind of decent user-experience, but Chrome didn’t even get a result within that time. Oh dear.

Now, at this point it’s worth thinking about how the geolocation API obtains your current location. On a mobile device, it’s pretty easy – most modern smartphones have inbuilt GPS that give very accurate location readings or, failing that, you can obtain a reasonable estimate from triangulating your location from the set of network towers from which your phone can currently receive signal.

On a computer, the geolocation API relies upon either your IP address, or the known locations of any wireless networks to which you are connected. My broadband provider is a national network, based in London, so if you trace my IP address you’ll likely get the best geolocation match somewhere in London. That explains the IE9 and FF results above. So what if I repeat the test but on my laptop, still connected to my own home router, but this time via wi-fi?

Oh for Pete’s sake – now Firefox is timing out! Maybe this whole thing was a bad idea. I can barely bring myself to test IE9, it’s bound to be worse… 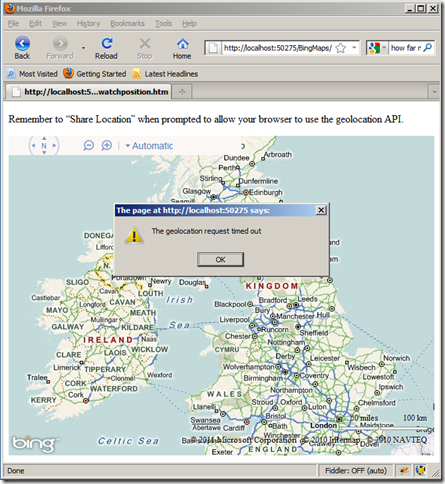 …oh, but wait! Finally things are looking up! IE9 successfully geolocates in well under a second and , what’s more, the result is a geolocation that is accurate to under 500 metres, and really does include my current location. Finally, this is something that could actually be sensibly used to create location-specific services for me. 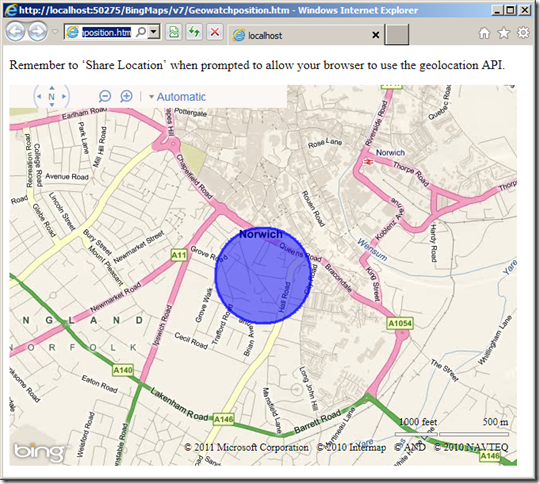 Holy smokes! The Chrome result, when used over a wireless network is worthy of note for two reasons. Firstly, it is lightning fast – loading the page and zooming the map in milliseconds. Secondly, that really is where I am right now, accurate to within about 30 metres. And remember I’ve not got any special hardware or anything here – I’m connecting to my own broadband router via my own personal wi-fi. Crikey! 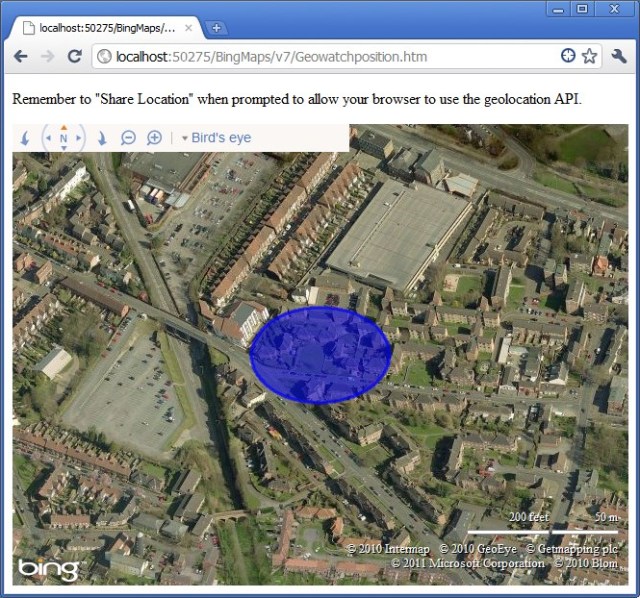 Even though the implementations are consistent across the three browsers tested here, the results are so wildly different as to make it completely unreliable. To my surprise, Firefox (a browser I have evangelised in the past) was the worst in test – failing to deliver at all over a wireless network, and delivering a next-to-useless result over wired. Chrome delivered a scarily accurate result over wi-fi, but timed out over a wired connection. IE9 was the only browser to actually deliver a result in both cases with anything like reasonable accuracy. However, even then it necessarily is retrieving the location of my IP address in London rather than my actual location, so it’s hard to see how it could add much value at anything other than a national level (for which you may as well lookup the IP address of the client in a geocode database such as http://www.hostip.info/, for which you don’t need to ask the user’s permission)