Following a recent conversation with Isaac Kunen from the StreamInsight team, I decided that I should find out more about Microsoft’s complex event processing engine. Technology moves so fast that there are probably a hundred topics that I wish I’d know more about and, although I had a superficial idea what StreamInsight does, I’d never really looked at it in much depth because I didn’t think I had any particular use for it. So this post captures my first baby steps with using StreamInsight – hopefully it should provide some guidance for anyone else who hasn’t tried it yet, and perhaps a few chuckles for those people who are already experts in the field.

What Is StreamInsight, anyway?

The first hurdle I had to overcome was not a technical one, but a mental one: what exactly is StreamInsight and what it it for? You can read all the release material from Microsoft which I won’t bother repeating here, but these are the things I had to get my head around:

So, how could I put this all together and make an example related to spatial? Well, here was my plan (explained using my limited knowledge of StreamInsight terminology):

That’s my plan, at least, and if you follow over the next few blog posts you’ll see how I get on in actually achieving it. I haven’t prepared these posts in advance, so there’s a very real chance that I’ll get halfway through and give up, crying. We’ll see.

For this post, I’ll start right at the beginning and just jot down a few notes about getting StreamInsight installed and configured.

I wondered whether the StreamInsight service was actually running. After all, the installation was very short, and I don’t remember setting up anything relating to service accounts etc. unlike in a SQL Server installation, for example. Sure enough, StreamInsight was set to be a manual service, and wasn’t currently running, so I tried to manually start it:

Hmmm. Let’s just leave that for a while and look at what else was added to the start menu. There’s a link to the MSDN documentation and a link to some codeplex samples and, well, that’s it, actually.

Documentation is boring so I downloaded and browsed through the codeplex samples instead. The one entitled “PatternDetector” looked interested, so I loaded it up. I changed the server connection string where indicated to provide the name of my StreamInsight server specified during installation:

Then I built the package, hit F5 and, what do you know, it worked! At least, I think it worked – here’s the output: 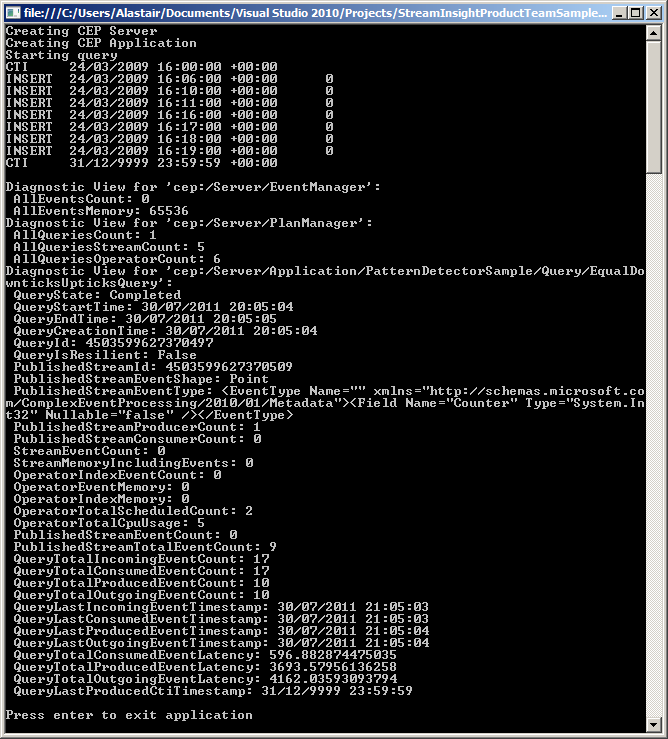 So that’s the end of my first experience with StreamInsight. In my next post, I’ll look at how to create a Input Adaptor to load events into the engine containing a spatial payload.

This entry was posted in SQL Server and tagged Spatial, SQL Server, StreamInsight. Bookmark the permalink.