Maps in the Time of Cholera

Posted on September 8, 2011 by alastaira

Today is John Snow day. Not Jon Snow, the Channel 4 news presenter, but Dr John Snow, the man widely recognised as the father of modern epidemiology. His statistical analysis and pioneering use of maps to understand the cause of an outbreak of Cholera in London in the 1850s still influence geographic analysis today in the fields of medicine and beyond.

On the 8th September, 1854, Dr Snow presented convincing analysis that led to the removal of the handle from a water pump in Broad Street (now Broadwick Street) that he proved to be the source of the Cholera deaths in that area of London – a triumph for scientific reasoning and analysis.  That moment is celebrated every year by the John Snow Society, who hold an annual lecture on this day; today’s lecture is being given by Hans Rosling – one of the best public speakers on the topic of science and statistics in the world. (if you’ve never seen him, you should really check out his TED talks).

Anyway, as my own little tribute to John Snow, I’ve taken the spot map he produced that plotted the location of deaths from Cholera and the sites of different water pumps in an area of Soho, London, and tried to put it in a modern context. The hand-drawn map used by Snow is astonishingly detailed, and still accurately portrays much of the modern day topography of that area of London. However, the map may not seem that familiar to today’s Londoners as many of the roads have been renamed in the last 160 years –   Marylebone Street is now Glasshouse Street, Silver Street is Beak Street, and John Street is now Great Portland Street, for example. So, I’ve removed the original labels from the map and replaced them with their current road names.

To add further context, I’ve overlaid Snow’s map (which covers approximately a 1km x 1km square area) onto a Bing Maps aerial background, allowing you to pan and zoom around the nearby vicinity, and I’ve extended the roads and labels across the boundary from the background map onto the overlay, making the join between them more seamless. You can adjust the opacity of the overlay to blend Snow’s map into the aerial background. I’ve also included the locations of Piccadilly Circus and Oxford Circus underground stations.

Finally, I’ve added a little bit of interactivity – hover your mouse cursor over any of the water pumps labelled on the map to display the Voronoi cell created around that location – i.e. the area containing all those points that lie closer to that water pump than to any other pump. Hover over the pump on Broadwick Street and you’ll see that the vast majority of Cholera deaths (the black lines being a tally of deaths at each property) lie within that Voronoi cell. If you assume that people always collected water from their closest pump, you can begin to see the reasoning that Dr Snow applied in his proof that Cholera was a waterborne disease rather than airborne as previously thought. (Note that Voronoi cells imply straight line travel through walls and buildings, rather than true travel distance analysis along streets as employed by Snow).

Read more about John Snow here, or play with my map here. 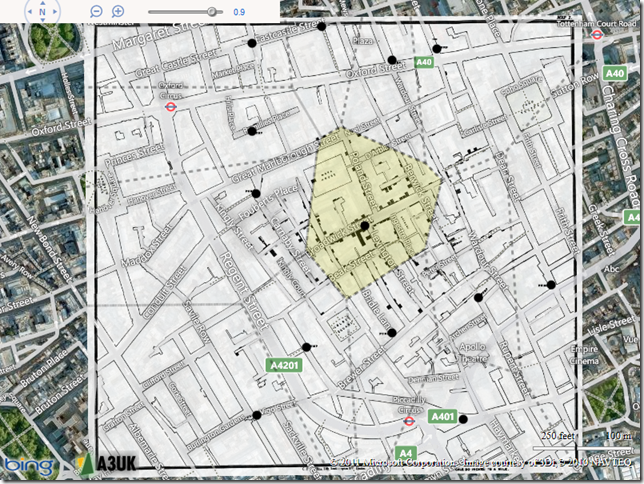