Like, it seems, many people, I’ve spent some portion of today downloading and playing with the first preview version of Windows 8, released in the early hours of this morning. You can grab the release either from the windows dev centre or from MSDN. If you’ve got an MSDN account, I strongly recommend using the latter (together with the download manager) – it gave me download speeds of 25Mbps rather than 0.5Mbps from the public download link.

Once you’ve nabbed the .iso file, you’ll want to install it. If you go for the x64bit version with the developer tools, as I did, the first thing I noticed is that the file is 4.8Gb – too big to burn onto regular DVD media. Not a big deal, as I was planning to install this under a virtual machine on the computer onto which I’d downloaded the ISO anyway, but possibly worth noting.

Scott Hanselman posted a blog article explaining how to boot Windows 8 from a VHD created from this ISO, but the steps involved seemed rather convoluted to me (requiring a USB stick, manual disk partitioning, and lots of disclaimers in case you irreparably break your PC…). What’s more, I’m in the habit of installing any CTP/Beta software under virtual machines that I can run from within my host OS rather than replacing it, so I wasn’t too keen to follow his approach. So I set about creating a virtual machine on which I could run the preview instead.

I normally use VMWare Player as my virtualisation client of choice (not the fastest, but free, reliable, and fairly feature-rich). However, as has been noted by several people on Twitter, the current developer preview release simply doesn’t work in VMWare Player. Trying to create a new Virtual Machine based on the ISO file simply generates the error vcpu-0:NOT_IMPLEMENTED as shown below:

I haven’t personally tried it, but I understand that Microsoft Virtual PC suffers from the same problem, so don’t bother going there either.

Fortunately, (and slightly ironically) Oracle’s Virtual Box seems to have more success loading the Windows 8 image than either VMWare’s or Microsoft’s offerings. So, grab a Virtual Box if you haven’t already (why not? It’s free!) and create a new system, using “Other Windows” as the OS type. I don’t know what the minimum required specs are for Windows 8, but I gave the VM 4096Mb of RAM and 60Gb hard drive, which should be plenty. Choose to create a new start-up hard disk using the VDI file format. (More detailed instructions on these steps can be found at http://www.windows7hacker.com/index.php/2011/09/install-windows-8-developer-preview-on-virtualbox/)

Once the machine is created, start it up and on the “installation media” dialog box, navigate to the WindowsDeveloperPreview-64bit-English-Developer.iso image on the host machine. Then finish the wizard and, if all goes well, you should shortly be seeing this:

Note that, if you don’t see the above, but see an error status 0xc0000225 An unexpected error has occurred instead … 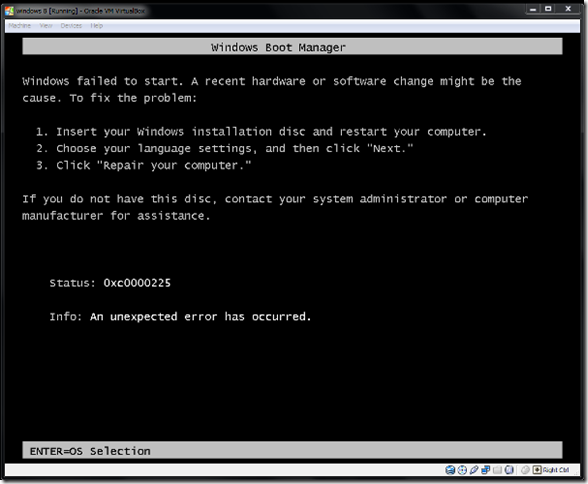 … then it’s possibly because you haven’t got the APIC setting enabled on the BIOS for your virtual machine. Shutdown the VM, then open the VirtualBox settings and ensure that the checkbox highlighted below is checked:

The final question, of course, is that having got Windows 8 to boot, what the heck are going to do with it? I’ve just spent 10 minutes swiping aimlessly around…

This entry was posted in General Development and tagged Windows. Bookmark the permalink.