Trying to understand and compare the features of modern mobile phone handsets is a nightmare. The rate at which the various fields of technology are advancing is mind-boggling, and it’s not helped by the seemingly endless list of acronyms used to describe them. My new Sony Xperia S phone, for example, lists among its features: HSDPA, DLNA, WiFi, Bluetooth with 2DP and EDR, SMS, MMS, a radio with RDS, A-GPS and GLONASS, and NFC.

I’m hoping that, by the end of the 24-month contract that I’ve just had to sign to acquire aforementioned handset, I might just have worked out what half of those things are and whether they’re actually of any use to me. And, in this post, I thought I’d start by describing my first experiences with NFC.

Not only do they not require power, but passive NFC targets are tiny, lightweight, and paper thin – and this means that they can be embedded in a wide variety of materials. In fact, there’s a reasonable chance that you already have one or more NFC targets in your house – they are used in Oyster cards used on the London Underground and some credit cards and passports, for example:

Of course, the idea of embedding digital information in business cards, posters, and other media to be read by electronic devices is hardly new either. You might be familiar with data matrix or QRcodes, which can encode data similar to the way in which a traditional barcode does:

Data matrix, barcodes, and QRcodes like those above are just a way of expressing information in a compact form that is easily read by a device. They are static, and read-only. In contrast, the data contained in an NFC target can be both read and overwritten, again and again, by a simple device such as a mobile phone.

So, time for a play…

NFC and the Sony Xperia S

My Sony Xperia S is unmodified and exactly as supplied on the Vodafone network here in the UK. That means it’s running Android Gingerbread 2.3.7 with Sony’s NXT UI on top.

“Out-of-the-box”, it comes with two installed applications related to NFC:

Before investigating the potential of either application, I first enabled NFC via the Wireless & network settings menu, as shown near the bottom of the screenshot below:

Once the NFC capability is enabled, it’s time to try out the applications.

The Sony “Xperia SmartTags” application doesn’t seem to appear in the app launcher list, and nor does it have an icon that can be added to a home screen. It does, however, have a widget as shown below: 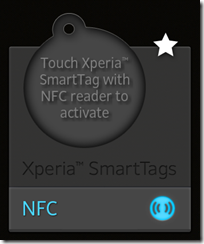 As the instruction states, rather than being a generic NFC application, the SmartTags widget appears only to be designed to respond to an Xperia SmartTag – a Sony-branded NFC tag. The problem is that, not only did my Xperia S not come supplied with any SmartTags, but nor are they currently available to purchase separately. The Sony UK website describes them merely as “coming soon”:

Without either possession of, or the ability to acquire, the hardware necessary to actually make this app do anything, it pretty much dooms “Xperia SmartTags” to be added straight to my list of “useless apps to be deleted”…

The Xperia also comes with the Android “Tags” application, which can be loaded from the App launcher:

There’s not much to see in the default Tags application screen – it just lists tags that have been scanned and, as I haven’t scanned any yet, it’s a big black page. Fortunately, in my wallet I do happen to have both an Oyster card and an NFC-enabled Barclaycard, so I held each one up to the back of the phone for a few seconds to see what happened.

My initial excitement when the phone recognised both cards was slightly reduced when I realised that the Tags application merely recognised them as “Unknown tag type” and couldn’t really do anything else.

Feeling slightly underwhelmed by my achievements with the pre-installed applications, I decided to turn to the “Google Play Shop” (the place to get apps for your Android phone, previously known as the “Android Market”), where I found a couple of alternative NFC applications including some claiming not only to be able to read NFC tags, but also to write them. This sounded a lot more promising, and the first application I decided to try was NXP Tagwriter.

Before getting anywhere with the TagWriter application, I needed to acquire some physical tags to be written. Much though the idea of reprogramming my Barclaycard sounded quite fun, I thought it would be safer to start off with a blank NFC tag, so I turned to Google and found a company called RapidNFC, who supply a variety of different shapes and styles of NFC tag. Not having the slightest idea about whether I wanted a “NTAG203” or an “Ultralight C” tag, I sent them an email asking for advice and got a very prompt and helpful response. The very next day, the postman delivered a package from them containing a sample of several different sorts of NFC tags. If you’re considering doing anything involving NFC tags, I’d definitely be happy to recommend RapidNFC based on my experience (they didn’t also send me the 50p in the picture below – that’s just so you get a sense of scale for the tags!)

So, onto programming my new shiny tags. Fire up NXP Tagwriter and you get a screen with a choice to view, create, browse, or share tags. Choosing to create a new tag prompts you to select the type of content this tag will contain – a contact, URL, SMS, or just plain text.

I decided to just create a simple plain text message to begin – just enter your text and hold the NFC tag on to the back of the phone for a second or two to write the data to it:

And that’s it! Once stored, the text can be read back from the NFC tag using either the TagWriter application, or the Tags application. Either application will then display the text message stored on the tag:

I tried three different kinds of tags from RapidNFC – the Ultralight, NTAG203, and 1k – and could write/read them all first time. The difference between the types of tags, as I understand it, is that they have slightly different maximum storage capacities, and can operate at different distances from the initiator device. They’re also slightly different physical sizes.

So that’s the basics of NFC covered. Over the next few posts, I’ll look at doing something more exciting than just writing/reading a text message. Particularly, I want to see how to make my phone perform certain actions in response to scanning a tag (which, I understand, is what Sony’s SmartTags application is meant to do in the first place), and also how to read more detailed information from existing tags. There are already some applications that claim to provide this functionality on the Google Play shop but, if I’ve got time (hah!), I might have a go at programming my own Android NFC app using the Android NFC developer guide.

This entry was posted in Uncategorized and tagged Android, Mobile, NFC, Sony. Bookmark the permalink.