I noticed a question on StackOverflow recently, concerning the ability of various web-mapping services (Google Maps, Bing Map et al.) to plan routes across national borders. I have to say that it’s a question I’ve never really considered before – all the trans-national routes I’ve ever tried to calculate have worked as expected, just the same as those contained within a single country. However, having given it some thought, it certainly is an interesting issue.

Even across contiguous land masses such as mainland Europe, most mapping services manage their datasets on a country-by-country basis. This makes sense, because the providers of that data are often governments or other national agencies, and the quality, completeness, and timeliness of data available will therefore vary between countries.

Bing and Google both offer similar country coverage for their mapping services:

So far, so good, but what about situations where you plan a route that passes through more than one country? Even though the dataset may internally be partitioned into separate countries, you’d still expect those national datasets to be “connected” where appropriate, at the points where a road crosses the boundary between two countries. However, it seems that, as a by-product of managing datasets at a national level, some mapping providers don’t consider certain routes to be valid because they don’t regard roads as contiguous when they cross a national boundary.

For example, Google will plot a route between Ipiales and Pasto, in Colombia, or between Tulcan and Quito, in Ecuador, say, but it cannot calculate a route between Tulcan, Ecuador and Ipiales, Colombia… despite the fact that they lie only a few miles from each other, connected by the Pan-American Highway: 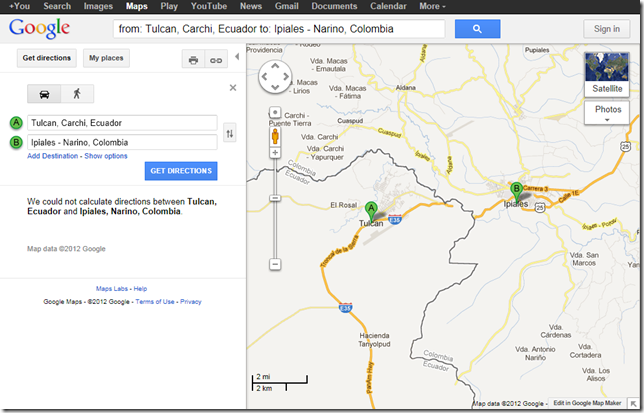 Bing Maps, however, does calculate this route: 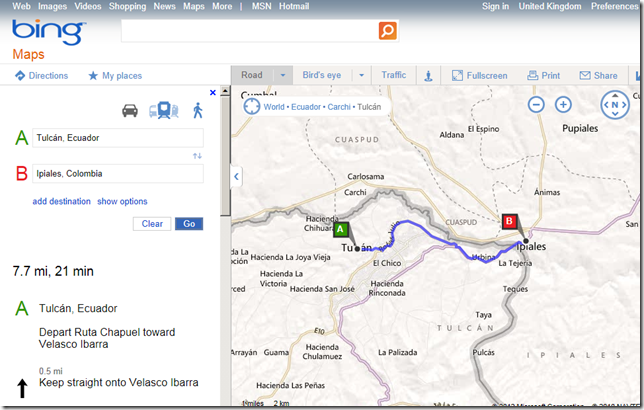 There are other examples; Google Maps, for example, doesn’t appear to calculate any route that crosses into or out of China: 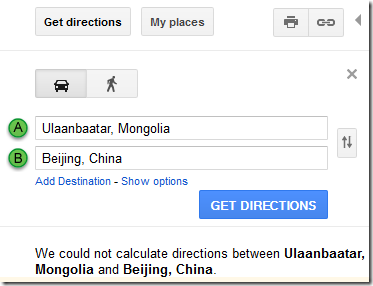 Which, again, Bing Maps does without complaint via the international border crossing between Zamyn-Üüd and Erenhot:

Of course, there are some other routes where it perhaps makes sense to be slightly cautious of crossing national borders. Bing Maps suggests that travelling from Cairo to Damascus is a “simple” 10 hour drive into Israel, Jordan, and then into Syria…:

Whether it makes sense to even attempt to complete this journey, Google Maps opts to send you the long way round via the Turkey/Syria border instead:

In practice, I’m certain I probably wouldn’t attempt to drive either of these routes…