I’m creating a game in which I want to transition between two camera views – a top-down, overhead camera that gives a zoomed-out world view, and an over-the-shoulder style forward-facing camera to give a close-up view. Let’s say for the sake of discussion that these positions are defined relative to the player, as follows: 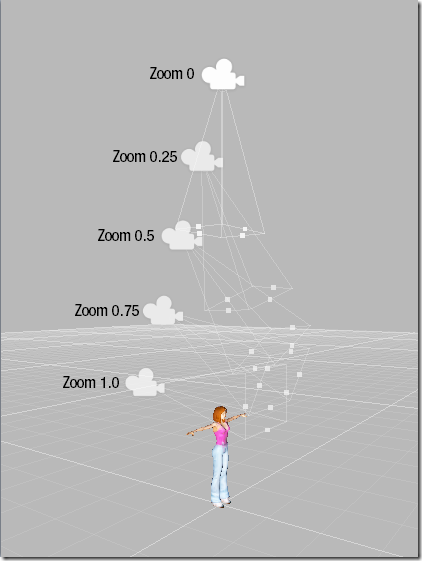 However, this didn’t create the effect I wanted – I wanted to remain largely looking down as the camera zoomed in, and only pull up to match that player’s look vector at relatively close zoom levels, and also to ease the movement at both ends of the zoom.

My next thought was to ease in/out the camera motion using one of the functions described in this earlier post – perhaps a sigmoid curve, so that the rate of rotation was greatest at either extreme of the zoom spectrum. But I had trouble finding a function that exactly described the motion I wanted to create.

And then I discovered Unity’s AnimationCurves. I don’t know why they’re called animation curves, because they’re not specific to animations at all – they allow you to define custom curves based on an arbitrary number of control points (keys), and then evaluate the value of the function at any point along the curve. 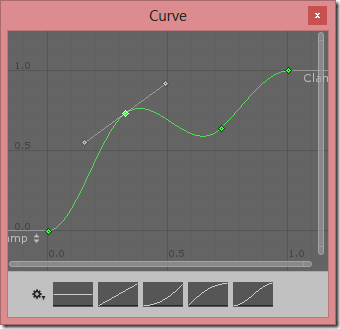 To look up the value at any point along the curve use the Evaluate()  method. For example, in the curve above, the y value of the curve at x=0.5 is given by Curve.Evaluate(0.5) , which results in 0.692. Using this you can smoothly adjust any variable based on a single dimensional input.

I have three camera transform parameters that change between my two camera locations – the offset position in y and z axes, and the rotation in the x axis. Since each animation curve can express only one dimension, I thought I might need to create three animation curves – one to describe each parameter that varies as the camera zooms in. However, on more thought I decided a better way: to have one curve to control the rotation around the x axis (i.e. adjusting the pitch of the camera), and then a second curve to set the distance which the camera should be offset back based on the forward direction of the camera at that point. Since the camera rotates about the x axis, translating back along its normal means that the second curve will govern both the height (y) and offset (z) in a single curve.

You can create animation curves in the inspector, but I initialised them in code as follos:

This generates the following curves:

I then evaluate the appropriate point from each curve based on the camera zoom level, as follows: 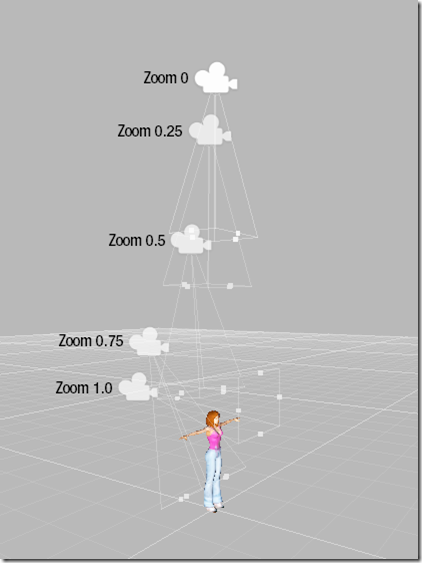 This entry was posted in Game Dev and tagged 3D, Camera, GameDev, Unity. Bookmark the permalink.