So I’ve been using MapTiler to create some quick raster tilesets from a set of GeoTIFF images. MapTiler is a Windows application that will reproject and cut any GDAL-supported datasource into a set of 256px x 256px image tiles, suitable for use as a custom tile layer in Google Maps or Bing Maps et al.

MapTiler is essentially just a GUI wrapper around the GDAL2Tiles.py python script, which is distributed as part of GDAL. 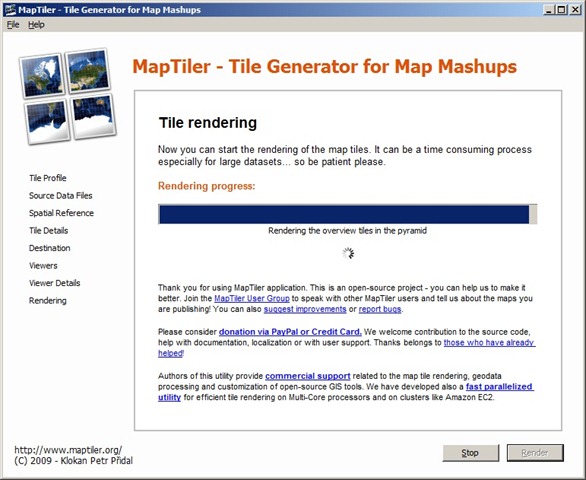 Like all GUI wrappers, it provides a convenient front-end interface, and doesn’t require the end user to have any knowledge of command-line processing or build tools. This is an admirable objective in itself because, as noted in previous posts, simply trying to compile the components of a typical spatial tool chain can be quite a headache. Generally speaking, the application is reliable, easy-to-use, and generates pretty good quality results.

However, like many GUI applications, in the process of simplifying the experience for the end user, MapTiler also loses some of the flexibility and power of the underlying script. The current version of MapTiler (download from http://maptiler.googlecode.com/files/maptiler-1.0-beta2-setup.exe), for me, has three main shortcomings:

To correct those issues, you’re going to have to ditch the pretty MapTiler front-end and get dirty with the command-line instead, manually running the GDAL2Tiles.py script that sits at the heart of MapTiler.

Although GDAL2Tiles.py comes bundled with GDAL library, it has dependencies on other libraries. If you attempt to run the GDAL2Tiles.py script straight out of a newly compiled GDAL build, for example, you’ll most likely get the “No module named gdal” errors, as follows:

The reason is that, in addition to the GDAL library itself, you also need to install the python bindings for GDAL – allowing you to call into the GDAL functions from a python script. I don’t know much about python, so I won’t even attempt to explain this further, other than to say that the easiest fix is to install the requisite libraries from the OSGEO4W package, highlighted as follows:

(If you don’t have the GDAL library itself installed, you can add this from the OSGEO4W installer as well). With these two in place, you can get on with calling the script. The syntax and list of possible parameters can be retrieved by opening up a command shell and calling:

which produces the following output:

-k, –force-kml     Generate KML for Google Earth – default for ‘geodetic’ profile and ‘raster’ in EPSG:4326. For a dataset with different projection use with caution!
-n, –no-kml        Avoid automatic generation of KML files for EPSG:4326
-u URL, –url=URL   URL address where the generated tiles are going to be published

The option I was particularly interested in is the “Resampling” parameter, since I wasn’t particularly satisfied with the results that I was obtaining from MapTiler. To test it out, I tried tiling a sample GeoTIFF file from the Ordnance Survey Street View dataset. The source image in question is the southwest corner of Grid Square TQ38, and looks like this: 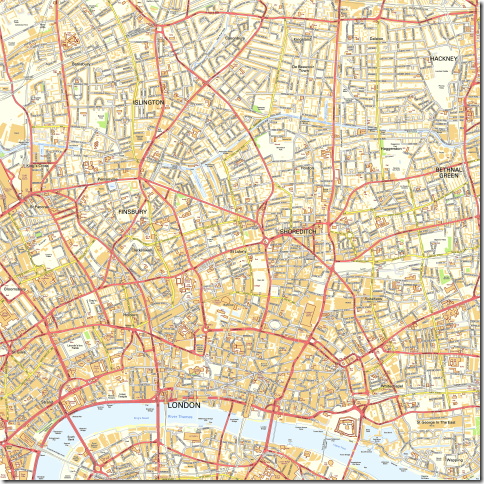 Note that the full size image is 5000 x 5000 pixels, and projected using the British National Grid system, EPSG:27700. Producing tiles for Bing Maps will necessarily involve warping the image and resampling it to the appropriate zoom levels. To start with, I just tried the default method (‘average’), as follows:

Unfortunately, this did little more than generate an error. But at least it was a helpful error – informing me that my source TIFF was not in the correct RGBA colour bands. Fortunately, that can be corrected by creating a VRT pointing at the source TIFF using gdal_translate:

Now, simply try GDAL2Tiles again, but pointing at the VRT rather than the original TIFF:

This generated a different error – this time stating that the source file had no coordinate reference system. Somehow, in the gdal_translate process, this appeared to have been stripped off. Since I knew the coordinate system was British National Grid, I supplied that using the –s_srs parameter:

(These are both examples of the sorts of things MapTiler automatically does for you behind the scenes). Now the script seemed to be working successfully, and started to generate subdirectories of 256 x 256px output tiles, following the TMS tile numbering system. So, I started to try different options for the –r resampling parameter.

Tiling the previous image at level 16 using different resampling methods for my sample input produced the following (only one representative tile shown for each method):

Near (quick but ugly)

Oh no. Not again. It turns out that the antialias resampling method has additional dependencies – PIL and numpy.

numpy can be installed, as with gdal and the gdal python bindings, from the OSGEO4W setup:

Installing PIL is a little bit more involved. Firstly, you need to register your Python installation. To do save and execute the following script from within python. (i.e. save this as a new file, register_python.py, in your OSGEO4W directory. Then load up the OSGEO4W command shell and type python register_python.py)

Once the PIL installation has been downloaded and executed, you can finally create anti-aliased (and probably the best-looking) tiles as follows:

Was it worth the effort? Probably not. The anti-aliased tile is, I think, slightly better quality than the average tile produced by GDAL2Tiles or MapTiler but, looking at my source TIFF file again, I notice that it was never that great resolution to begin with. Crap in -crap out, I guess, but at least I’ve learned a bit in the process.

The results will obviously be very different if I was using a different type of raster source input – perhaps a terrain image, or photographic image and, for these, perhaps one of the other resampling types will produce better results.

It’s probably worth mentioning that everything done by MapTiler (and, therefore by GDAL2Tiles.py) can be done in Safe FME also, with the following simple workflow:

The properties of the WebMapTiler provides many of the same resampling methods as described above, and produce essentially identical outputs:

The main advantage of Safe FME is that it requires absolutely none of the faffing about that I had to do to get GDAL to produce the same result. In fact, I’ve summarised the entire process in just two diagrams. But then again GDAL is free. So, I guess, what you pay for with FME is not having to spend hours in front of your computer swearing and looking up error messages on Google

The last point I was going to make concerned how to create tiles more efficiently on a multi-core machine. gdal2tiles.py does not make use of any parallel-processing logic, and I don’t know nearly enough about python to go about hacking it to make it so. However, there are some easy tricks you can do to divide the work between CPUs.

Firstly, you can divide your source data into two virtual datasets using gdalbuildvrt. You can either specify different bounding boxes for the two sets or, if your source data is comprised of a set of files anyway, simply load one subset of files into one datasource and some into another. Launch one instance of gdal2tiles.py to process one dataset, and another to process the other dataset, and set the affinity of each process to different CPU cores. The problem with this approach is that you will need to re-render the “edges” of each set – tiles that contain features from more than one source.

A better approach (based on the answer provided at http://gis.stackexchange.com/questions/2336/converting-huge-geotiffs-to-tilepyramid ) is to make a modified copy of the gdal2tiles.py script that processes tiles in reverse order. You can do this by modifying line 1180 from:

Then, launch both the original and the modified script to process the same data source of tiles at the same time, setting the affinity of each script to different CPU cores. Make sure the scripts are set to not overwrite existing tile images (by adding the –e switch) and, as the scripts come close to meeting in the middle, quit one of them and allow the other to finish off cleanly. Alternatively, you can adapt the logic in one or more modified scripts to specify an exact, distinct batch of tiles that each should process (i.e. divide the range between tminy and tmaxy into the number of cores across which the job is to be processed), and run each script to process a different batch.

Based on the comments provided by Klokan below, I also compared a tile output from the commercial parallised version of MapTiler. I don’t know if this uses exactly the same algorithms as the free version, but the output looks like this (crisp, but to me the colours look faded):

This entry was posted in Bing Maps, Spatial and tagged Bing Maps, GDAL. Bookmark the permalink.